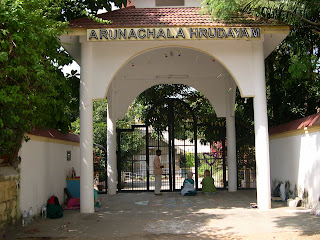 Visited Lakshmana Swamy's ashram in Tiruvannamalai (It is on a road parallel to the Yogi Ram Surat Kumar Ashram).
Swamy and Sardamma give darshan only 2 days of the year, Dec 25th and Deepam. They are not interested in meeting people.
at 5:59 AM 5 comments:

As told to a friend:

My life is quite different from yours. I have completely surrendered my body and mind to Swamy and I cannot follow any other path.


A letter to Swamy:

Sri Lakshmana Bhagavan. You are God who gives me bliss. I cannot leave you even for a minute. You are my mother, father, Guru, God. Whatever you say I will do. I wish to stay always with you, and i am only happy when I am with You. I have no other direction to go. I cannot forget your name, and i shall always be thinking about your name and form. You are the foundation for me, and my burden is yours forever. If i realize the Self i shall have no business with you. Till then i have to stay with you. You attracted my mind, and now you have stolen it.


A poem at the end of the letter:


In my difficulties you will hear my words and you will help me. In leaving me you cannot go anywhere for you are the Self. Please don't cast me aside. I am surrendering my life to you. What use is this life without looking at your form?

This is a photograph of the time when Sardamma first met Lakshmana Swamy. The eyes and smile radiate the same grace as Bhagavan Ramana. 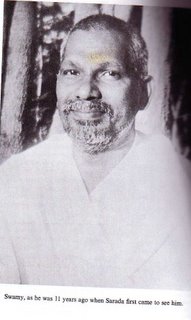 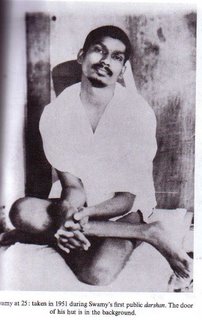 Taken in Gudur at age 28 when His hut was being repaired.

The following photograph of Swamy is one of Sardamma's favorites.

This is the earliest photograph of Sri Lakshmana Swamy aged 19. 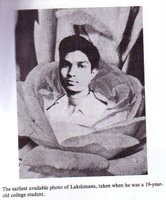 The back cover of the book, No Mind - I am the Self

One may read the Vedas from beginning to end but one will not find such a detailed account as this: an account ofthe experiences of a devotee who surrendered everything and realized the Self. It is rare to find such a Self-realized one
- Sri Lakshmana Swamy, spoken July 1982. 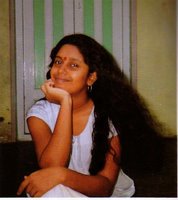 The following was taken two months after Sardamma realized the Self (Dec 18, 1978)

My congratulations to my favourite daughter, Mathru Sri Sarada, who in my presence on the 18th of December, 1978, realized the Self Supreme which is eternal peace and bliss. There is no doubt that good devotees will benefit by this book which contains her life and teachings.
- Sri Lakshmana Swamy, written June 1982.

Taken in 1986 in Lakshmana Swamy's house

Sri Lakshmana Swamy was born on December 25th, 1925. He realized the Self in the presence of Ramana Maharshi in 1949 at the age of 24.

Since then He has led a largely reclusive life in a small ashram in Gudur, AP, and may also be in Tiruvannamalai at some times of the year. He rarely gives darshans. In 1978, his disciple and adopted daughter, Sarada realized the Self at the age of 18.

This page is dedicated to this great, silent Swamy from whom flows the grace and love of Arunachala and Bhagavan Ramana.

I hope to meet this great Swamy this summer, God willing. I will post more on Him then. Until then I post some photographs of His hoping that you will feel His grace too.
at 10:33 PM 14 comments: